Welcome to Our Members page! LICWI is comprised of over 85 published and unpublished authors and illustrators. Please scroll down to learn about each of our members!  Asterisk (*) denotes published members.

Jennifer Ball is a freelance illustrator, graphic designer and painter working and living outside of New York City in Port Jefferson Long Island. She's a graduate of the Hartford Art School in Connecticut where she majored in Visual Communication Design and minored in both illustration and painting.  Jen is a member of LICWI , SCBWI and CBIG. Her medium digital illustration.

June H. Blair is an Illustrator and freelance Artist and Designer. She has been a member of LICWI since its earliest inception as East End Children's Writers & Illustrators and a long-time member of SCBWI.  Her presentations demonstrating the evolution of the children's book from sketch-to-print have been well received by audiences that range from preschool to adult.

Karen Bonnet began her career as an editor/reporter in the early 1990s. Today, she works in public relations and marketing through her business, KLB Services. Karen is a co-host of a television show, The Writer’s Dream, which features local authors. She enjoys providing book discussions and workshops for schools, libraries, and book stores, based on
her riveting adventure story for elementary school-age children, as well as her life experiences.

Selene Castrovilla is an award-winning teen and children’s author. Selene holds an MFA in creative writing from New School University and a BA in English from New York University. She lives on Long Island with her two sons.

Deborah Cuneo is a freelance illustrator,  art teacher and an active member of SCBWI, CBIG and LICWI. Her current, finished     work is mixed media and digital, although she's always exploring new combinations of mediums with which she can create art. In addition to illustrating for both the general and educational children's book markets, Deborah also creates art for invitations, greeting cards, house and pet portraits, and basically anything that can be sewn, painted or printed on!

Diana Ting Delosh is an illustrator/writer. Her illustration credits include: Farfaria, Harcourt Achieve, Scott Foresman, Ladybug Magazine. She has written for Highlights/High Five and Ladybug magazines. Diana received the Highlights/High Five Pewter Plate Award for Puzzle Poem of 2008 and the 2002 SCBWI Magazine Merit Honor Award for Illustration.  She is a member of the SCBWI, CBIG and LICWI.

Linda Maria Frank created the Annie Tillery Mystery series from her experiences teaching forensic science and her love of Nancy Drew. She likes to think of the series as Nancy Drew meets CSI. She is working on a third book and producing her local access TV show, The Writer's Dream.

Bonnie Grubman is grateful to have fallen in love with picture books, to have worked in early childhood education and to have had the dream of getting published come true. (And Moonstruck ever since.) When she is not writing, she is creating pretty things with artful "junque" like wood, nuts, bolts, lots of paint and vintage mismatched china.

Book Titles
How Do You Get A Mouse to Smile?
Oy Vey, Life in a Shoe
​The Only Way I Can

Joe Guida is well known on Long Island, NY as "The Singing School Bus Driver."  He performs his original music and stories at many schools and libraries.  One of his hobbies is gardening and he grows a variety of vegetables and flowers.  His moonflower plants inspired him to write his first book entitled The Legend of the Moonflower.   Joe currently has three children CD's and a Scool Bus Safety DVD.


Book Titles
The Legend of the Moonflower

Brian Heinz is a critically acclaimed author of children's books and an award-winning educator. He is also the founder of the Author/Illustrator events, an event that brings Long Island's finest authors and illustrators to their youngest fans. He also offers writing programs to school children and teachers. When Brian has a few relaxing moments, he builds historial model boats, and enjoys vacationing with his wife Judy.

For 27 years Tim Hoppey worked as a New York City firefighter
stationed in Spanish Harlem. Firefighters and the inner city have been the
inspiration for many of his stories. Tim is the author of several children's
books.

Amal is freelance illustrator and instructor from Baltimore, MD. She is published in traditional and educational children’s books and magazines and her work is in international collections and museums. She recently completed her MFA in illustration at the Academy of Art University, San Francisco and teaches at the Long Island Art League. She lives in the pleasantly strange village of Port Jefferson with her husband, daughter, and a thousand giant mushrooms.

Lois Kipnis is a creative arts consultant with forty years of experience as a drama teacher and arts administrator.
Her educational books are the outgrowth of her work as an artist-in-residence and instructor of workshops
that enable teachers to integrate the arts into curriculum.

Book Titles
Without a Script: A Caregiver’s Journey
Together We Can Improvise, Volume 1 (Grades K-3) and Volume 2 (Grades 4-6)
Things Can Always Be Worse! (a one act play)

Karenann E. Knotoff began writing at the age of eight. By the time she was fifteen she had won several writing and poetry contests along with the honor of writing a play for her high school drama club. The play performed to two sold out nights. In 2007, her first children's book was published. Karenann is married with two children. She  is an accomplished flutest, loves to read, swim, ride her bike, crochet, needlepoint and spend time with her family.

JoAnn Vergona Krapp is a School Library Media Specialist. Her articles on children’s literature have appeared in numerous periodicals,  including School Library Journal  and School Library Media Activities Monthly. In addition to writing, Ms. Krapp is a watercolor artist. She resides in Farmingdale, New York, where she teaches writing and painting workshops for children. She is a member of the national Society of Children’s Book Writers and Illustrators and the Amity Artists Circle.

Melissa Kuch first realized her passion for writing after her first story was read before her third grade class. Today, Melissa’s stories and plays continue to inspire and entertain readers from all walks of life.  In addition to writing, Melissa enjoys singing karaoke, playing tennis and watching The Marx Brothers movies. She currently resides in Massapequa Park with her husband Michael and approximately 20 fish (at last count).

Book Titles
The Hypothesis of Giants (Book One: The Assumption)
​
www.Melissakuch.com
Twitter: @kuchmelissa

Sandy Lanton, a former teacher, earned a BA in Psychology and an MS in Early Childhood Education from Queens College.  When she isn't writing or visiting schools, she likes to  crochet, play bridge, and read, read, read. 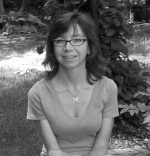 Jan Milusich is a teacher for the blind and visually impaired and an author of picture books and middle grade e-books.   She is currently looking forward to the release of her newest middle grade e-book entitled Bryn’s Quest: The Search for Clun’s Treasure. She is a member of SCBWI.

Tuere Morton writes young adult fiction by night and is a health professional by day, earning an MS from the University of Stony Brook. When she isn’t voraciously reading, the Long Island native’s fearless children and lovable German Shepherd serve as inspirations for her stories. She hopes you’ll enjoy the first book in her series, ICON.

Orel Protopopescu is an award-winning children's author and poet.  Her first two picture books, Since Lulu Learned the Cancan and The Perilous Pit, are now available as apps from Auryn, Inc.  Two Sticks was chosen as a Bank St. Best, 2008, and Thelonious Mouse is the 2012 Crystal Kite winner of the SCBWI New York metro region. Since 1990, she has conducted fiction writing and poetry workshops in schools and libraries all over Long Island and (in 2009 and 2013) in Paris, France. Orel lives in Miller Place, New York, with her husband, Serban.

Award winning poet, motivational speaker, and children's book author, Darren Sardelli, makes poetry fun and exciting for everyone! His poems are featured in 16 children's books in the U.S. and England, and 20 textbooks (worldwide). Since 2004, Darren has visited more than 500 schools (in 8 states) as well as hundreds of libraries and camps. His assemblies and writing workshops have turned countless students and educators onto poetry. Darren's poems have been featured on Radio Disney, in best selling books on the Scholastic Book List, and are being used in lesson plans all around the world.

Book Titles
Galaxy Pizza and Meteor Pie
One Minute 'Till Bedtime
Is This A Poem?
I Hope I Don't Strike Out

Joseph E. Scalia was born in Brooklyn, New York and has taught English and Creative Writing on Long Island to reluctant junior/high school students for 33 years. He has written and published numerous poems, two novels, FREAKs and Pearl, and two books of short stories, No Strings Attached and Brooklyn Family Scenes.

Stephanie J. Shulman has a B.A. in Fine Arts and a M.S. in Elementary Education.  Stephanie is a school teacher who has been writing children’s stories and poetry as a creative outlet for many years. Her poetry was first published in "A Cascade of Memories- The National Library of Poetry". She looks forward to sharing her stories and inspiring her readers and listeners to laugh, smile, and connect through literature.  Stephanie lives on Long Island with her husband and two children.
Book Titles
Monster Bash
​The Nose Pickers

Sheila and Letty Sustrin are identical twin sisters who retired after teaching for 38 years in the Brentwood, N.Y. School District. In their "Life After Retirement" career, they have co-authored a humorous series about a retired teacher. The twins visit schools and teach children about retirement. They like to feel that their books have helped bridge the gap between young and old.

When Cheryl's not running, swimming, biking, sailing, kayaking or hiking, she’s writing, painting and drawing.  With eleven illustrations published with SCBWI and an award-winning poem published in Cassandra, Spring 2010, her dream of publishing one of her own books hovers ever so close.  Currently Cheryl shares her stories and illustrations at Story Time with Cheryl, an interactive story time program for young adventurers.

Debbie Vilardi is seeking an agent for her independent work as well as freelance projects. She writes teachers' guides for Cobblestone and Dig magazines and has three picture books available from Tun Tun English. She also copy edits and writes articles for Xiaoduo Media, and moderates the Online Critiques section of the SCBWI Blueboards.
Book Titles
Animal Hospital
I Can!
Outside!

Sandy Wasserman is a retired teacher and taught for over 35 years, working for the most part with Gifted children, including her grandchildren, who inspire many of her stories.  She loves to swim, read, travel, and explore unusual places. Sandy is a member of SCBWI, LICWI and the LI Association of Jewish Librarians.

Wendy Wax has written  many children's books and illustrated some as well. She  graduated from the University of Michigan with a BFA in graphic design, and moved to NYC where she became a children's book editor and a collage artist. Wendy has written many books for Nickelodeon. She writes "Pete the Cat" early readers and illustrated Pinkeriffic Playdate, a Pinkalicious early readers. Wendy also freelances as an editor/consultant, mostly for SCBWI members who want to get published.


Book Titles
City Witch, Country Switch
Even Firefighters Go to the Potty
Renoir and the Boy with the Long Hair
Bus to Booville

Joyce A. Zucker is a teacher, and professional musical storyteller a board and table game inventor. She creates educational interactive musical stories and songs. She gives workshops and programs for teachers and children (grades Pre-k to 4). She has presented and lectured at colleges, universities, elementary schools, libraries and museums.  She also had a column in Parent's Connections. Many of her songs and games have been published in different publications.